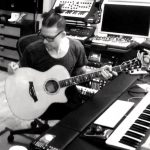 Produced a cover of Gavin Degraw’s “I Don’t Wanna Be” for One Tree Hill sung by both Amie Miriello and Brandon Rogers.

Produced a song with Nick Lachey for ESPN. Used for the Big East March Madness Basketball playoffs and has since become the theme/bumpers for various ESPN sports events/commercials.

In 2010 had a top selling “Christmas song” that he co-wrote with Aitan. Featured on iTunes under Top Rock records for 5 straight weeks.

Produced a cover of Ozzy’s “Goodbye to Romance” with Alex Mercier.

Jack Osbourne has released the song on iTunes.